Going uphill fast in order to go downhill faster is essentially the idea that spawned the modern ski industry. Initially people had to climb a mountian if they wanted to ski down. Eventually the rope tow was concocted, which beget the chair lift, which beget the high speed quad/gondola which beget boredom, coldness, and long lines which beget the uphill racing series I took part in on Saturday. An uphill race at Whaleback Mtn in Enfield, NH is how I would begin my day Saturday, not to mention competition in 2010. The race was the first of the Winter Wild series, www.winterwild.com

The races have four options: Open (running or snowshoes), tele gear, heavy metal (bring up a snowboard/alpine skis) or track skis. I decided, after some hand wringing, to go with nordic skate skis and compete in the track ski division. I would have to put my V1 into action and then barrel down a mountain on skis without edges. I can do that. I brought along the yaktrax just in case I wimped out, but I listened to myself commit to the skis once I got to registration at 6:15 am.

The race was scheduled for a 7 am mass start. Start time got pushed back a few minutes because day of registrations kept coming in. The field consisted of over 80 competitors. One of which was Justin Cox, my cross nemesis and fellow Lebanon resident. Justin was on his short tele/touring skis.

A countdown began and at 1 the field surged towards the uphill. I double poled for the first 100 meters or so and then began skating. I'm on the left side of the first picture. Helmets were a requirement, but they threw it aside for the first race. I went with one anyhow as insurance for what was sure to be a sketchy downhill on nordic skis. Thanks to Evan Dybvig for the photos 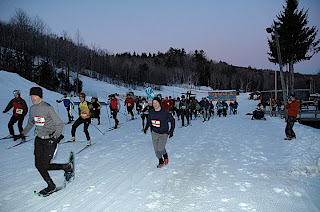 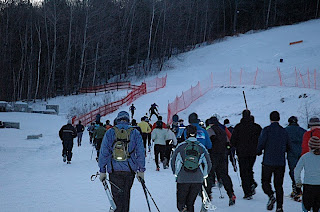 The first stretch was the steepest. It was steep both in grade and because the trail is part of Whaleback's terrain park, so there were mounds of snow that had been stacked for enormous kickers. I got through that section in the top ten. Two skate skiers and five runners were ahead of me. I dared not look back yet. The hill turned right towards the top, luckily the trail hugged the backside of Whaleback rather than going straight up. The grade got a little gentler, but my legs and lungs were smoked from the first section. So were most others I figured. Until I heard Justin give me a cheer. He didn't sound winded.

The experience was reminiscent of the Ascutney hill climb. I kept on looking at turns in the trail and initially hoping it was the last and that the top was near. And then I would immediately suppress those thoughts the best I could because the top comes when there is nothing more to climb. Not when you hope to be done climbing. I hadn't done any recon on the hill, so I didn't quite know when it would come. Anyhow, the trail meandered up, twisting and turning. Justin was behind me. Justin made his move on me and I trailed him for the last third or quarter. I stayed near. 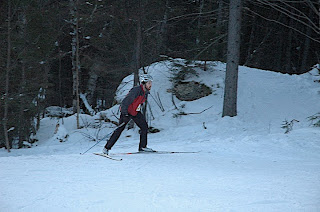 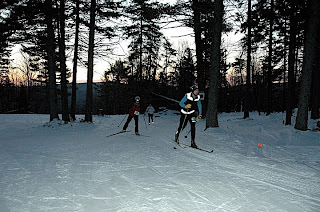 Finally the top came into view. I could see the chairlift's apparatus as I turned towards the summit from the backside of the hill. The turn to go down was off camber. Justin had to pause to take off his skins. I squeezed past him and started charging down hill. The downhill was hairy. I passed a pair of runners just after the top. A little farther down, two more runners. And then just at the trail's bottom the final runner was passed, he must have been cooking. I understand it was Tom Jacobs. I made the final turn and cruised through the finish line, the third person to cross the line in 14:35. I had been 9th or 10th to the top. The first two across the line at the bottom were skate skiers. Numero uno was Dave Cahill who is an avid nordic racer. He crossed in 12 minutes flat. The other nordic skier and I followed. Justin came next followed by the runners.

The awards ceremony didn't kick off until 8:30 so we had a little time to kill. The second race at Whaleback on February 20 is two laps so Justin, Jesse Norris and I decided to take a second lap for training. The second lap wasn't nearly as taxing. We went at an easier pace, but sill it wasn't too painful. I did take a digger on the way down. I realized I was lucky that I only had to pass runners on the way down during the race. They were pretty easy to go around.

All in all the morning was blast. I walked away with a coffee mug for my efforts. One of the two nordic skiers was in my age division so I placed 2nd in the 20-29 category. Which I realized after wasn't the division I was supposed to be in. Racing age this year is 30. Yikes. Got to get used to that.

I didn't fly the Penguin colors, but wish I had. I could have gotten away with a long sleeve and the jersey. The temperature was above freezing even at 7 am. Maybe Eric and Raina will see it as an advertising expense and get a batch of thermal jackets. OR!! Eric, John, Raina, Molly will join me at the next race at Ragged on Feb. 6 or the second race at Whaleback on Feb. 20. (Vinnie and Jess don't have to make the five hour drive for a thirty minute race).
Posted by GeorgeOH at 8:33 PM 1 comment: