Penguins in the News!

Check out the video documentation of Winter Wild at:

Highlights: Repeated glimpses of George cresting the hill, Jesse running by at 4:40, Alix & Amber running at 5:08 and the interview with Annabelle at 5:13.

Go Penguins!
Posted by Alix at 8:51 AM No comments:

Sigh. With the cyclocross season long over, my quads are starting to forget what it feels like to work. Duh du du duhhhhhhhh.... Winter Wild series to the rescue!!


If you haven't heard of it, the Winter Wild is a set of 4 races at different mountains around the area. The goal for each race is to start at the bottom, race up to the top and THEN back down! It's a simple timed race with prizes for different categories (based on weight of transportation you use: feet, skate skis, telemark/snowboard, etc) and age. It's barely competitive, though - everyone is there to just have a good time and get up to to the top of the mountain to see the sun rise. The races have to start before the ski lifts open, so they go off at 7AM. Makes for kind of a cold, dark start to a Saturday, but what could be more invigorating??


The January 15th race was at Whaleback, an adorable mountain known for it's night skiing, snow jumps and terrain park. There was a decent turnout of 40-50 people and sub-zero temperatures. The course had been altered from the previous year, making it much steeper and more intimidating, though only 2 miles in length. After an en masse start, we were off! Jesse and George were towards the front of the group, running with their snowboards. They were out of sight within a few minutes. Amber and I started towards the back, as she was just running the whole thing and I was pulling Annabelle in the Chariot. Boy, was that tough. Without Amber pushing, I'm not sure I could have pulled Annabelle the whole way. While we continued to pass other competetors, at one point it was so steep that we were continously slide-stepping to keep from slipping. With both of us there, though, we made it through and to the top as the sun was just peeking over the horizon. Gorgeous! Then, we began our lazy jog back down the mountain as the skiers we passed whizzed by. 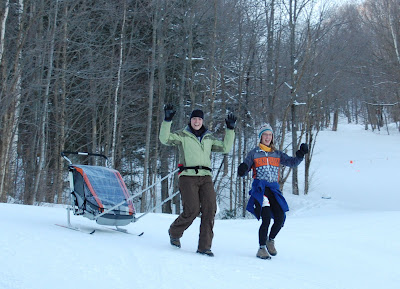 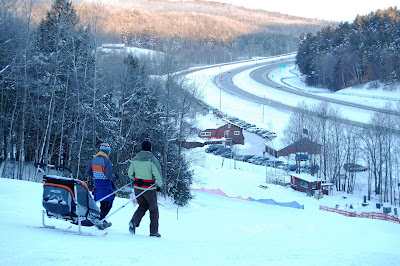 The times coming in were fast, with the skate skiers doing the best (no surprise there). George blew away his category & age group by over a minute(!) and Jesse came in second. Good work, Penguins! I think Amber & I won the Team Push-Pull division, although we didn't get a cup for it. The WMUR tv crew got a few good shots of Annabelle, too, so I'll see if we can find that video and post. All in all, an awesome event with a fun community spirit. The next race is this weekend (Feb 5th) at Ragged. Takers?
Posted by Alix at 11:04 AM No comments: