There were some ups in downs in the run-up to this race. On the up side, I had one of my better performances last year on this course, and day 1 was going to be almost identical to that course. On the down side, I hadn't ridden for 2 weeks and my last ride ended rapidly when my knee collided with a tree while mountain biking. This forced me to one-pedal out of the woods and resulted in my kneecap turning black and blue almost immediately. On the up side, if I was able to hold my relative placing in the 3s from Northampton, I'd likely be in the elusive Verge points. On the down side, I could barely even pretend to think that I was 'tapering' or 'recovering' into this race. With a fairly weak road season this year, combined with most of October off for the birth of my son (!), I have definitely been racing myself into shape this cross season. No races for 3 weeks does not help you race into shape. Also on the down side was vivid memories of watching David Rath take a really good header on the first lap last year.

John and I carpooled down for this one. Raina and Oliver decided to skip day 1 (more on that later). We got there with plenty of time to get a good warm-up. I had to keep reminding myself during the warm-up that I hadn't ridden in 2 weeks and I didn't want to use up the precious little tapered/recovered energy I had in the tank. After the masters race finished, I jumped on the track to go over the run-up and check out the horse jump. To my surprise, the wettest part of the course coincided with the highest elevation - that was curious. The downhill after the run-up was a bit soggy and rutted. I watched the guy in front of me nearly eat it due to the mud and ruts, though in retrospect, I'm thinking he just wasn't the greatest bike handler.

Fast-forward to staging. I couldn't remember when I'd pre-reg'd for this race, but my number was pretty low (so was John's). They gave call-ups to all the points holders (curse my desire to be one of you!) and then lined the rest of us up by number (per usual). I remember thinking: "wow, for having such a low number, there seem to be a lot of rows in front of me". Then I turned around - it felt like most of the field was holding at least 1 Verge point. Geez, there were only two rows behind me.

Fast-forward to the whistle. We're off - and I'm thinking about not crashing like Mr. Rath. Bad idea. It turns out that when you think about not crashing, you ride slow. I was probably 8th from last coming off the track. Bad idea. Luckily from my 'strategic vantage point' I was able to see that the 3rd or 4th wheel into the run-up had mis-handled the off-camber. Whoops! The whole field was backed up going up the hill and all of a sudden I'm back in contact. After a fairly leasurly stroll up since the pack in front of me didn't seem too concerned with letting everyone else get a little gap, we got to the top. 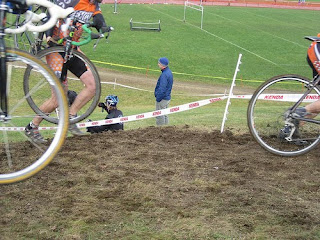 Quick check, hmmm, just a couple people behind me. Back on and down the soggy hill. Had I not seen the guy in warmups struggle mightily, I would have bombed the hill and scrubbed the speed right before the horse jump. But my mind had gone soft and I was on the brakes (!). Bad idea. Anyway, over the horse jump and I can't barely see anyone behind me. I was thinking to myself: "almost a reverse hole shot in a Verge 3 race, hmm, bad idea. I better go faster". Unfortunately or fortunately, the guys in front of me in the twisties right after the horse jump were not such great bike handlers. 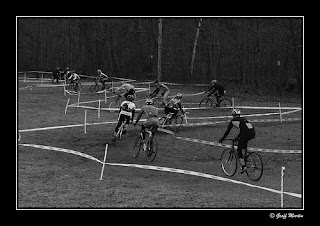 
Going slow, my frustration was building and when the course opened up a bit, I seriously dropped the hammer. Well, not so seriously...I passed one guy and then another. Then I 'smartly' decided to sit on the next guy through the pavement section. This was one of the high-wind areas (40 or 50 mph gusts) where a draft was much appreciated. Much to my chagrin this guy was a passenger when we got to the soft and lumpy 180 by the parking lot. The guys I'd passed took some noteably sketchy lines into the corner that still have me shaking my head. Had I been a bikelength further ahead, I would have been T-boned. Either way, I brake, a gap forms and away I chase.

By this point (about halfway through lap 1) I was frustrated and kicking myself for starting the gentlemen's drift before the gun. Damn. This lit the fire under my bum and I started racing - you know, the late-breaking, hard accelerating, serious cornering type of stuff. Of course, I was waaaay back when I started, but it was fun to be passing people. The laps were all pretty much a blur after that, but I was happy that I passed the guy we were parked next to. He was one of those folks that puts his number right in the middle of his back. Not to get on a soapbox or anything, but 'left side' or 'right side' does not mean which way the aerial camera will be oriented. Having worked with results from a few races, I suggest this for placement (though I like 5 or 6 pins for cross).

After the race I tried to count the people I passed. I could only remember about 15 but thought there might have been more. Results were taking longer than I had patience for - mostly because I was starting to cool down in a major way. I couldn't motivate to walk all the way back to the track from the car, so we left without checking.

A couple things are lucky for me: the timers and officials keep track of the finish order (!) and crossresults.com is doing the Verge points tallying so the races get posted same-day. A little internet checking showed a 35th out of 61 finishers. Not too shabby for totally sucking on the first half-lap. Some recorvery and a start-whistle attitude adjustment might actually get me into the points I so desire.

Raina and Oliver decided not to go on Day 1 so that they would give me incentive to go down for Day 2 since there wasn't anyone to carpool with on Sunday. Unfortunately, the plan backfired since I didn't want to drag them down for most of the day and had some work at home that needed to be done. Long story short: I bailed. Am I proud? No, but I felt pretty good about Saturday and I didn't get a chance to ruin it with Sunday.
Posted by Eric at 9:46 PM