For at least a month, John was talking about possibly going down to the Putney mountain bike race on June . He kept using words like 'we' and 'us' when describing this event. Being one of the few races ~1 hour away this made some sense. Like most races far in the future that I'm considering, this seemed like a good idea at the time. So I agreed that if we didn't motivate for the Keith Berger crit, we'd go down and play in the dirt.

The weekend of the race, John was camping with the family with little-to-no cell service and made a few special trips to coverage areas to see what I was thinking. I kept telling him the forecast was terrible and the rain and humidity were making everything slick. I really wanted an out. Mentally, I told myself that if it was still raining at 9pm I'd bail on racing and do something else. Well, at home it stopped raining at 8:30p and John called around 9:30p to let me know he'd already come home (sans familia) to rest up and go race. I was hemming and hawing about not being so into it when my lovely wife said something along the lines of "you're going to race, go get your sh   stuff together". Since I wasn't really planning to race Sunday, I hadn't prepped my bike, packed anything, eaten much for lunch or dinner, or really prepared at all. Starting at 10p I scrambled around finding the things I needed and settled down to a nice bagel with cream cheese and chocolate milk dinner - at midnight.

Since we were racing the beginners class (Cat 3 now), John picked me up early so we could get down there and get some pre-ride in. It was hot and a bit muggy even at 8 am. Around 8:30a we're ready for a preride and headed out to check out the course. At race pace previous years, the lap times were just shy of a half hour. After a while of preriding we discussed the pressing need to get off the course and back to the start. We came to a section that doubled back a bit on an earlier part of the course and bailed out there, making it back to the start with about 5 minutes to spare. Checking the course map after the pre-ride we bailed at the half-way point, which also meant we got to ride most of the single track as well.

Due to small fields, they combined the start of the 20-29 cat 3s and the 30-39 cat 3s. Since I read Colin's blog too much I thought his patent-pending reverse hole shot might be the ticket to success in mountain bike racing. Unfortunately, I couldn't sit in quite enough and had to settle for 5 or 6th wheel back out of the ten of us. Down the 1.5 track section and then onto the first climbing hill I had to start passing people. Going into the first true singletrack section, there was only one guy ahead of me just out of sight. That would really be the last I saw of him. Roughly the next hour was spent riding by myself wondering if I was going fast enough and if I would be caught from behind. It turns out I didn't really need to worry, the next guy back was 12 minutes behind me. I finished with little fanfare and got ready to cheer John on. A few minutes later he comes into the feed area and takes a neutral support cup of water. I heckled him about drinking less than 100 yards from the finish and told him to hurry up and pedal. 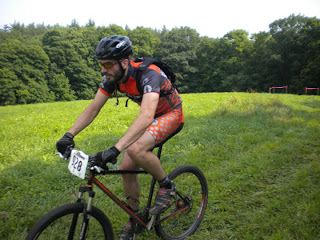 It turns out that the guy out in front of me was a 20-29 year old and could be labeled even more of a sandbagger (really?) than I could. The only question in my mind is what happens when the course isn't nearly so roady-friendly. Almost the entire second half was double track climbing and descending. Both John and I ended up on the top step of the podium - I'm still on the fence, mountain biking has so many catagories it seemed like more than half the beginner participants were either winners or at least on the podium. 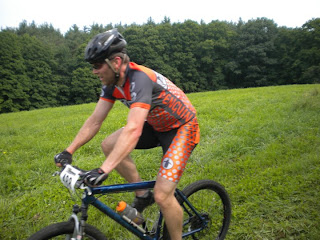