I like the NYCross series. Smaller fields than Verge, points tallied, quality events (for the ones I've been to) and great atmospheres. I just wish some of them weren't so far away from VT. I first sampled the Uncle Same race a couple years ago. I had a blast and the available course terrain is great. As such, it has a spot on the calendar every year.

To sweeten the deal, last year John and I found this place. It's killer and worthy of driving to Troy on it's own. Put it a mile away from the Uncle Sam venue and I'm still confused why I can never summon the motivation to do both days. The parking lot smells fantastic! 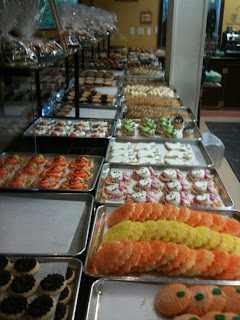 Partial selection at the decadent Cooke Factory in Troy, NY

For a multitude of reasons this ended up as my first race of the season. Late night before the race, I turn to Raina and say "Man, I haven't raced my bike in months, I hope I don't suck", to which she replies with a heavy dose of sarcasm: "I'm sure with all that training you've done, you'll be fine". Thanks honey, see if I bring you any pastries.

Staging is done by NYCross points, crossresults.com points, and then registration order. Seeing as I procrastinated, I was a day-of registrant and John beat me to the table. There were 2 guys out of the large field with higher numbers than mine. I'm happy that this race is popular, but the 60 or so starters we had was probably near a good maximum on-course number. The start was a paved straight into a 90 degree wet turn (did I mention NE got hammered with rain the night before?). I figured there'd be people sliding around and laying it down so I might as well face up that I'm not going to pass 1/5 of the guys in the first 200 yards before the turn and just coast it in. There was the inevitable feet down in the first few turns, though no heavy crashes. Of course, the effect was the classic slinky so it wouldn't have mattered too much if I were 10 guys up or not.

As it was, I was dead last and I felt I should verbally communicate this to John. He yelled back "not for long", which I took to mean that I should start pedaling and hoped it didn't mean that he was coming back to join me. I passed some folks in the first lap and realized I was probably a minute or more back from the front half-way through the lap (silly staging protocol), oh well. Lots of pedaling, off-camber, greasy, and fun turns. I tried to keep my roll as "passer" and not "passee" (not to be confused with poser and passe) and thoroughly enjoyed the course.

Post-race I decided I could have gone harder as I wasn't really sore anywhere. No worries, I'll redeem myself with NYCross at Wicked Creepy.

Stopped at the Cookie Factory which boasts fine pastries at city prices. 2 cider donuts, 2 glazed donuts, tiramisu, canoli, eclair, crazy icing and cookie sandwich, and a coffee and I still got more than $5 in change from my $20. And yes, I shared the sweets.


This is normally where I'd put a picture of me doing something awesome. Had anybody gotten a photo of me at this race, it would have been awesome.
Posted by Eric at 4:04 PM