Let's imagine for a minute that a group of die-hard CX racers are on a cross-racin' cruise along the coast of New England. Somewhere along the way their ship sinks and 20 of them cram onto a life raft with their bikes and the ships cook who had already stockpiled the raft with food. As it turns out they all happen to be cat 3 racers, and many days pass where they banter about cross and their crossresults.com ranking. Eventually, they end up stranded on a deserted island full of Oak trees, and set about creating a cross course to pass the time until they are rescued: 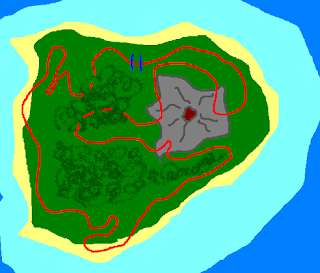 Without the trusty internet, they decided that they'll start afresh with their cross rankings, using pure linear interpolation to distribute points. Since the cook was impartial and had no good excuse he was elected to keep track of the points. A picture was drawn to show the cook how to calculate points for each race: 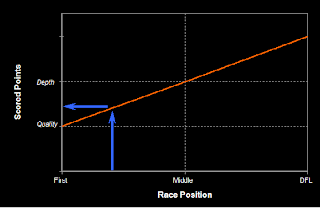 The last 10 races were averaged, dropping the highest and lowest. To get the numbers rolling everyone was given 400 points to count the first race.This would then be dropped and only 'earned' points would be kept.

Living the life of monotony that exists on a deserted island, the finish order was extremely predictable. In fact, you could have written down the exact order of finishers even before each event began. After a year of weekly races, the group planned to hold the first annual Fried Acorn CX party to celebrate bike racing, relive the glory, and review their cumulative results. Unfortunately for the cook, the instructions on calculating points were decidedly vague - depending on who he set as the 'middle finisher' the points either trended towards zero, infinity, or finite, non-zero values. 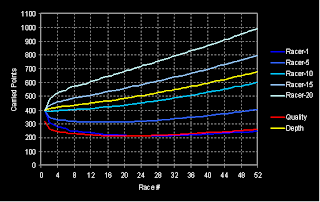 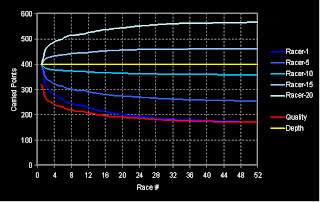 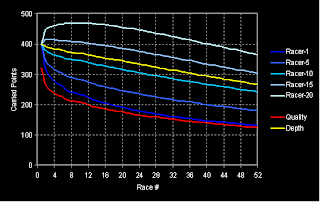 Points trending if the average of the points scored for the 'depth' members is lower than their points average before the race, these are the results that the cook gave to everyone


Being the crafty and diplomatic fellow that he was, he set up the awarding of points in such a way that everyone's points were lower than where they started and in a generally downward trend over the course of the year. The way he did this was as follows: he selected a group of people in the middle of the race, averaged the points they carried into the race and called it 'depth'. He then assigned the first racer after the 'depth racers' the depth score and followed the schematic for linear interpolation shown above. Everyone was elated with their points; the consistent winners' points were lower than everyone else, and the last place finisher was also 'getting better'. [note for the interested reader: there are other ways to accomplish lowering most of the racers points while excluding only those at the back of the field]

This went on for another year and the points kept rolling. At the second annual FACX party, the racers started noticing a trend and getting suspicious about how the cook was handling the points. The winner was a little unhappy that his margin to last place had shrunk over the year. Based on the linear interpolation model, they thought, the last place person should be doing 'worse' every week. 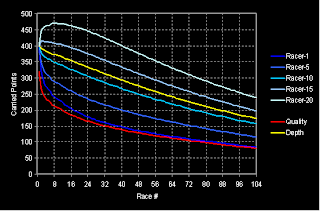 In order to avoid being slowly beaten to death by a bunch of scrawny armed bikers, the cook's only remaining hope was that the PV cell he had been working on while everyone else was racing would provide enough juice to power his smart SAT-phone and let him get in touch with the man to check his method against the real deal.

While waiting for the painfully slow dialup, the consistently last place finisher took the cook aside. "I heard that a similar group of Cat 2s were stranded about a mile from here on another island, what would have happened to my ranking points if I had gone over and raced with them for the year? I wouldn't expect to finish anywhere but DFL, but I feel that 'Catting' up would have really raised my game." The cook obliged and showed that indeed his points would have significantly decreased after a year of racing with the Cat 2s, even if he finished in the same spot. 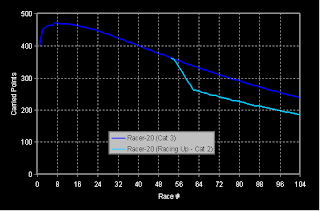 The benefits to the last place finisher had he 'Cat'd Up'