The Noho course was an improvement over last year with the start finish on the lower section of pavement rather than the upper section. Much of the course was similar to last year - the barriers were moved down into the lower field. The start chute was a bit nerve wracking, but manageable. 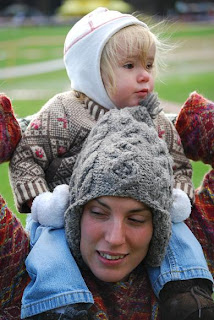 Julee and Adelia at Noho
Raina, Oliver, Julee (Raina's sister who was visiting for the week), Adelia (Julee's 16 mo daughter), and I all loaded into Julee's rental car (Kia Rio), because it was the only vehicle we had that would fit 2 car seats and 3 adults. It felt like I had to pull the bike apart to the tubes to get it to fit into the trunk. John was kind enough to bring my trainer and spare wheels in his car since there wasn't any room left. We headed out early to cheer on new teammate Molly H. In the womens 3/4 race. She had a good showing and was able to move up consistently with a solid 9th place finish, though I think her bike is holding her back. 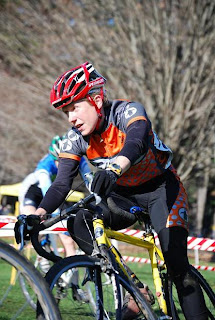 Molly moving up with 2 to go
Since I missed a verge point by one place back at green mountain I wasn't going to get a call-up - bummer. With 125 pre-reg'd, a call-up would have been pretty nice. As it turns out John, George and I all managed to be staged in the same start row on Saturday. Right from the whistle I felt pretty good. The bottle neck at the curb and the bottle neck at the run up were a bit of a drag on the first lap, but other than that I felt like I was doing a good job passing folks, picking good lines, and conserving energy where I could. In the end Greg Brown and I were battling it out for the last couple of laps. After the bell he got ahead of me going into the sand but ran into a rider on the ground. I was able to make a pass and hold him off for 42nd spot. I was hoping for/expecting a better placing than that. 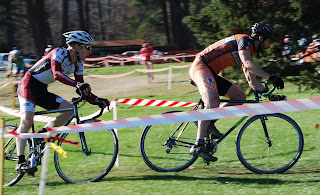 Me working on dropping an RPI rider 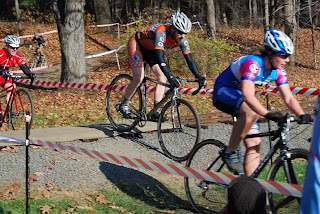 George mixing it up over the tracks 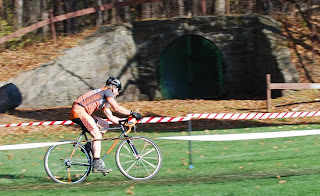 John headed towards the barriers

Sunday started with a crash in the start chute right in front of me. I managed to escape unscathed by the hair on my chinny chin, but the front half of the field was riding away from me. I managed to re-connect with a couple guys at the curb hop, but I wasn't moving up nearly as well as day 1. It was like de ja vu all over again with Greg breathing down my neck during the last couple of laps, only this time I was able to keep him firmly behind me on the last lap. Day 2: 49th, not as bad as I thought I was doing.

Elite men had a nasty crash, I don't think the one in the 3's was quite as bad .