If it weren't for bike racing I'd be a blimp. Food would try to stay away from me, but I'd seek and devour every tasty morsel within reach. With cycling and specifically bike racing, I have something to keep my mind occupied. The engine I've got doesn't need a whole lot of extra weight to slow way down. But I still love food. And food is there for me when the bike racing part of my life doesn't pan out quite the way I'd been envisioning it on all those training rides. John and I signed up for the 37th annual Lake Sunapee Bike Race. On the ride down we mostly talked about mountain biking and cyclocross and how relaxing both endeavors can be. Something to keep in mind while in a pack of 100 nervous cat 4 riders bombing around Lake Sunapee. The race was a disaster in general, but John and I both finished without crashing. As Eric wrote, great things at Sunapee=not crashing.

I got spit out the back on the last climb around an hour and forty minutes in. There was probably twenty minutes left in the race when I popped. I was pissed at myself. I don't think it was a lack of fitness, more a lack of aggressiveness. Actually that was another subject John and I discussed. To do well in the cat 4s, it helps to be an a-hole, and to be ignorant of said assholishness. There were a couple exemplars of this during our race. Anyhow, I rode alone through Newbury and back along the lake when a cop car went flying by me at, I would guess, 70mph. Hmm, I thought. Then I came upon the traffic circle. What carnage. Uhhh...it looked like a warzone. I counted four guys down and not moving, a couple more sitting, and many more standing with scrapes and damage on the side. Fortunately, no sign of John. John was in the middle of the wreck and did wear his tires bare but somehow made it through unscathed. Well, got to say it feels good not to physically hurt, but the ego is another thing.

Back to food, food helps my ego. I know it is only a temporary fix, but when things go bad on the bike it frees up my restraint and I chow! So tonight, the day after my ego bruising, I'm hankering for a snack. I look in the fridge and find a little grilled chicken. Straight up chicken sandwich? No, let's get loco. I already had some Stonyfield yogurt out on the counter. What else? There was some roasted garlic I hadn't used from pizza the other night. Parmesan cheese? I love the parm. Spicy Asian chili sauce? Oh look out. Any greens for this beast? No. But, there was a nice head of brocolli. I can make that work. So I've got chicken, bread, parmesan cheese, chili sauce, roasted garlic, brocolli and yogurt. Seven things I like. Would I like them together? 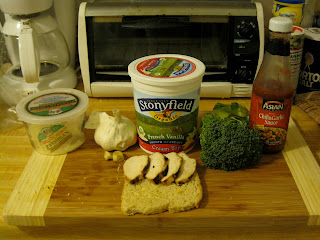 The cyclist in me only allowed a half sandwich. The glutton side was upset, but I have a short memory and who knows the Claremont points race may restore my delusions of bike racing grandeur. I toasted the bread, with parmesan cheese sprinkled on the surface and the chicken sliced and laid out on one side. 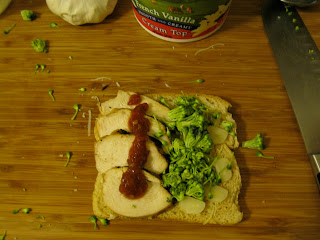 I sliced the roasted garlic clove and placed the slices all around one side of the bread. I used a chef's knife and shaved off the sprouts on the head of the brocolli. It makes for a decent green substitute in a sandwich. The only issue is it doesn't stay together that well. I put the chili sauce on the chicken. It looked hot. Hopefully the yogurt would cool the chilis down. 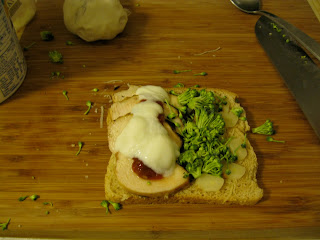 Mmmm...looks good. But how do I get it together? That took a little finagling, but I made it happen. I was a bite or two in before I sat down. 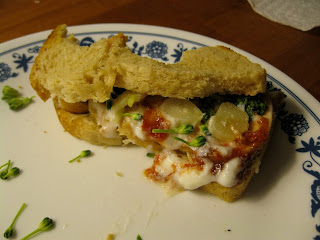 The concoction was decent. Not too fattening for that nagging cyclist side, and not too skimpy for the gluttonous side. If I had to do it all over again, I'd put in less chili sauce. Oh, and also stay with the group and sprint like a bat out of hell just before the Sunapee traffic circle. 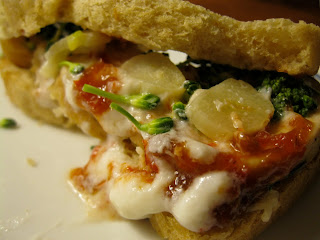