The hand-up vs. the call-up 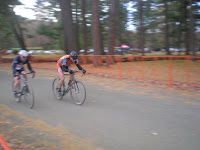 Mid-way through the Verge series its pretty evident that I won't be getting a Verge point. I'm not sure what (or who) made me think this was a possibility. I guess the hope was that Green Mountain and Downeast would be out of the way enough that the field would be sufficiently small. Maybe if they did a race on a Tuesday in Nova Scotia I might have a chance but I have my doubts. I suppose the lesson for this year is that false optimism is no substitute for training. Anyway - as we all know, no Verge points = no call up, which puts me two rows from the back of the 140 man field at Northhampton. Not that this cannot be overcome but as we leisurely strolled up the first run-up politely chatting with each other it became evident that it wouldn't be me doing the overcoming.
So, unburdened of living up to the Call-up, or cracking the top half for that matter, I looked for motivation. The bright side of a large field is that you are at least always surrounded by someone to race. I set my sights on the group in front and tried to catch them. As we came to the bell lap it seemed that this too would elude me. Just as I was about to go into soft pedal mode I glanced ahead and caught sight of the Belgian waffle tent. There I spotted my prize, my new motivation. Beer! Thats right, the Hand-up. Taking advantage of all the extra space around me I picked a nice clean line around the last corner and manuvered toward the tent. I reached out and cleanly grabbed the plastic cup of beer. I threw the beer in the direction of my mouth and managed to get most of it in - the rest spilling down my neck and arm. Newly motivated I put in a last kick and was able to close the gap on the group I'd been chasing. I blasted through the sand and got on the wheel of the guy at the back and prepared for the sprint. As we hit the pavement I held back a belch and put everything into the pedals. Victory was mine, at least this one. The more important Victory however was finding a little fun at a Verge race. As it turns out that can be as elusive as a Verge point.
Thanks to Dave and the guys from Expo/Superior Energy for the yummy beer.
Posted by John at 4:12 PM