Okay internet, I'm going to let you in on a little secret: I've got an arch rival.

Some people like to use the term nemesis, which has a bit more negativity and less respect than I would like to invoke. I'm sure anybody that races a fair amount here in New England, or probably anywhere, has 'that guy' or 'those guys' [gals] they always seem to end up racing against. Usually these arch rivals are people whom you're evenly matched with and your relative finish position is never a given from the start. Crossresults will help you find 'those guys' if you're having trouble, but you probably already have a pretty good idea. If you're racing well, the arch rivals are behind you. Racing poorly? well...you know how it goes.

For the sake of discussion, let's just call my rival Greg Brown. Greg and I have been racing eachother for a few years now. It all started at the Tuesday night races held at the auto track in Claremont (highly recommended). They run a points race with sprints every 5 laps, primes are mixed in as well. Thus on an approximate weekly basis we can throw down 12 or more times. We definitely go back and forth. If I had to categorize us, I'd say he's got a slightly bigger engine but I've got a little more punch to my sprint and possibly an edge in the handling department. We're pretty well matched. Racing on the road in this region, our paths have crossed more than a few times in crits, road races, and in cross too. Typically Greg has his way with me in crits, I think I may have the edge in road races, and I've pretty much dominated in cross. Greg has had some notable success on the road this year. I have not.

Where am I going with this? Honestly not sure, let's see how it turns out!

As you know, dear reader, the Flying Penguins co-promoted the second annual Paradise Cross Phrenzy on 11/13 with our friends down at Paradise Sports. It's held on the grounds around the Harpoon Brewery, Paradise Sports, and Simon Pierce (yes, a little something for everyone). I recommend you mark it down in your race planner for next year due to the venue and atmosphere.

After a full day of socializing, cheering, and standing around, it was time for the men's 3/4 race. Because I was socializing and generally not warming up, I managed to make it into the last (3rd) row for the start. Sure, as a promoting team I could have weaseled my way to the front, but we were represented there and I needed to work on my starts. Whistle goes off and I kill the start. Actually, it was pretty good - 6th wheel by the time the course narrows up before dropping into the halfpipe section. We were still pretty well bunched up by the off-camber up-down. Greg was running 3rd or 4th wheel at that point, lost traction and hit the dirt. He had a fast recovery and was running. Being rivals, I thought it was a good time to offer [shout] some encouragement to the tune of "Get on your bike, Greg!". He remounted but we were gapping to the guys out front. George squeaked by, and then after 5 or 10 seconds I took my rightful spot in front of Greg. Of course the gap was growing and now I had to close it down. I'll be honest, I burned a few matches, but we were taking time out of the gap little by little so it seemed like a good move.

First lap ends and we're dangling at about 6 seconds or so. I pulled over to let Greg take a pull and he gapped me like a spectator. The benefit of working hard for one lap was that we had a sizable cushion to the guys behind us, now I just had to focus on riding good lines and reeling him back in. It was going well until we hit the first barriers on lap 2 - he was much faster than I through the high-speed barriers and I was hemorrhaging time to him there. Sadly, the course favored more power and less of my skill areas. Couple that to the matches I'd burned, and oh, did I mention that my "training" this year hasn't really left me with many matches to start with? no, well, I have now. Either way, Greg was slowly putting more distance between us. I figured there was really only one good thing left to do: a little mid-race arch rival banter. So, sitting at a 15 second deficit with 3 or 4 laps to go in a section where the course doubles back on itself, I mustered my most ominous voice, sat up, pointed at him and yelled "I'm coming for you!"*.

It worked! After that, man did he start to put the time on me. It got so bad I couldn't even heckle him since our paths weren't crossing any more. Anyway, this is how I prefer to remember it...giving him a lesson on how to suitcase the bike (elbow in). 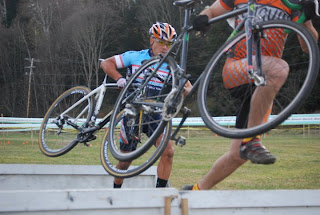 Eric leading Greg over second barriers
*or something to that effect
Posted by Eric at 12:35 AM