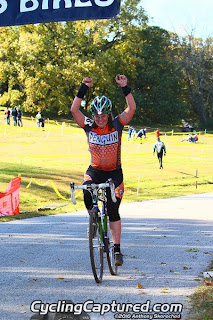 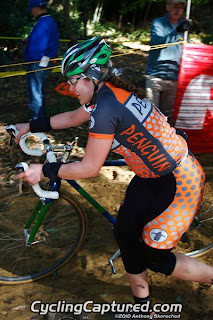 The Southernmost Flying Penguins have been staying close to the nest this 'cross season with the September hatching of Baby Hannah, but we've been able to get out to a few of our favorite Mid-Atlantic races with the little one in tow.
Preparing for fatherhood, namely running to the store for chocolate ice cream, left Vinnie with little training time, but he was able to go out and give it his all at two races in the weeks following Hannah's arrival. Including Charm City Cross, Day 2 in Baltimore, MD and Whirlybird in Bryn Athen, PA.
Jess and Hannah watch as Vinnie races at Whirybird... 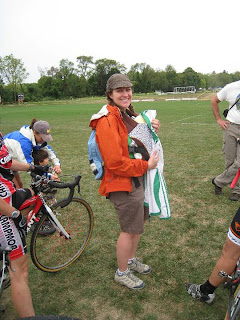 Hannah rides a Penguin for the first time at Charm City Cross... 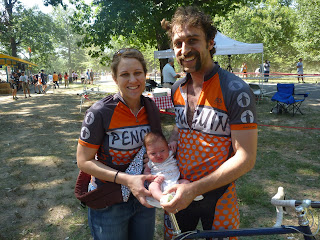 Hannah's six week birthday corresponded with Granouge, one of our favorite courses here in the MAC circuit. We loaded up the car for the short ride to Delaware so I could test my new aerodynamic muffin top. Let's just say I had a lot of fun and was not DFL.
It felt great to be out on the bike again. The weather was perfect for racing; a crisp fall morning with race temperatures in the mid 60's. The course was dialed in: a great combination of off camber turns, a steep run up, and sections to cater to both the roadies and the mtb'ers. Because of timing and a long line at the portapotty, I neglected to do a warm-up lap, which would have brought to attention an under inflation issue in my front tire. I really think that it cost me several places in the end, as my handling was seriously compromised.
When fitting into your kit is a victory unto itself...
Negotiating the wooded sandpit area.
Our latest race (thanks for posting the photos, Raina!!) was StatenCx 3.0 over this past weekend. It is held at a park along the water on Staten Island, a short 30 minutes from our home in NJ. The course reminds me some of the Warwick, RI race, with a long beach section, wooded track and grass sections. Unlike RI, however, it was a glorious 70 degrees in the sun and the is a cart selling Belgium Waffles, Waffles and Dinges http://www.wafelsanddinges.com/index.html. I like Strawberries, Nutella and Banana on mine). We've weathered each year of this race (previously, snow and freezing temperatures were prominent course features) and I actually won the 3/4 race last year, so it was great to have a day where we could bring Hannah out for the fun. Again, he victory was in fitting into the kit, but the technical features of the course, along with proper tire pressure, suited me well, and I finished 12th.
That will be our las trace of this season, but I'm looking forward to getting back in the gym over the winter and be ready for Mountain bike and 'cross in 2011.
Posted by Jess at 4:05 PM